Find Your Next Expert Witness

36
Register as an Expert

This post is the second in my look at the Independent Review of the Human Rights Act 1998.

The post is an overview of Chapters 2 to 4 of the report – Chapter 2 Section 2 of the Human Rights Act 1998 – Chapter 3 The Margin of Appreciation – Chapter 4 Judicial Dialogue.

Will working as a magistrate become the next CV must-have for wannabe lawyers?

The 3 Chapters offer a particularly informative analysis of these important topics.

Section 2, as it currently stands, begins by stating – “A court or tribunal determining a question which has arisen in connection with a Convention right must take into account any –(a) judgment, decision, declaration or advisory opinion of the European Court of Human Rights,….. etc

The words “must take into account” do not amount to “must follow”. Nonetheless, the HRA came fully into force on 1 October 2000 and it did not take too long before the courts had to give judgment on what the words required of domestic courts. This came in 2004 when the House of Lords gave judgment in R v Special Adjudicator ex parte Ullah [2004] UKHL 26 where Lord Bingham set out what came to be referred to as the “mirror principle” – “The duty of national courts is to keep pace with the Strasbourg jurisprudence as it evolves over time: no more, but certainly no less.”

From this starting point, the approach within UK courts has developed considerably and the road to the present day position is very well traced in Chapter 2 of the Review Panel’s report. The Report identifies and discusses 3 stages to the development of the law relating to section 2. The position at the present time is helpfully set out at Chapter 2 para 105 in this Table – 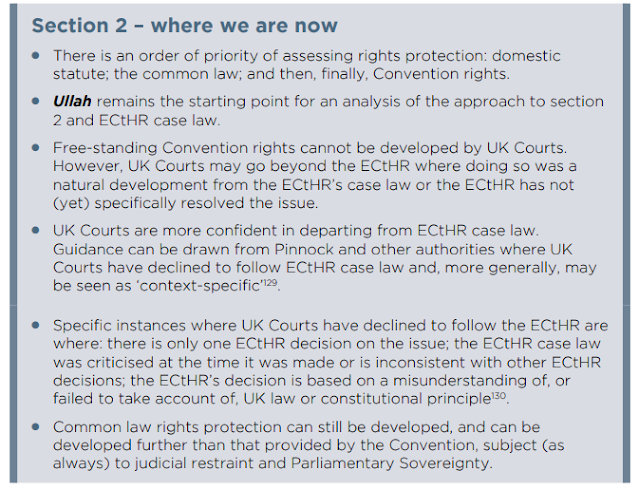 Chapter 2 goes on to consider options for reform. Several suggested reforms are rejected by the Panel including simple repeal of section 2.

The report notes that the UK court’s approach to section 2 has been careful and respectful of the roles of the government, Parliament, and the E Ct HR.  The approach adopted within the UK has enhanced dialogue with the E Ct HR – (dialogue being the subject of Chapter 4). The panel therefore made one recommendation which is that section 2 be amended to clarify the priority of rights protection. The Panel’s suggested amendment reads –

This would put into statutory wording the approach that the courts have developed. It appears to be an eminently sensible suggestion.

Chapter 3 The Margin of Appreciation:

Subsidiarity – A key point about the Convention is that its implementation is the responsibility of the signatory States such as the UK. It is for Parliament, the Government, and the courts to play their parts to ensure that the rights within the Convention are properly applied at a national level.

Essentially, this is referred to as “subsidiarity” and was affirmed by the Brighton Declaration 2012 and the Copenhagen Declaration 2018. Following the coming into force of Protocol 15 on 1 August 2021, the Preamble to the Convention contains the word subsidiarity.

Qualified rights – Many of the Convention rights are qualified. For instance, the Convention gives a right to respect for private and family life (Article 8) but there may be exceptions to (or “interferences with”) that right since the Article states –

“There shall be no interference by a public authority with the exercise of this right except such as is in accordance with the law and is necessary in a democratic society in the interests of national security, public safety or the economic well-being of the country, for the prevention of disorder or crime, for the protection of health or morals, or for the protection of the rights and freedoms of others”

Margin of appreciation – he E Ct HR has recognised, from its earliest cases, the need to take into account the different conditions and standards that apply across the 47 signatory States. There are considerable cultural differences as well as different legal systems. The ECtHR has therefore allowed States a degree of freedom of choice – or MARGIN of APPRECIATION – over the measures they take where it is necessary to interfere with convention rights. The degree of freedom granted to the States varies according to the subject matter. At all times however, the ECtHR retains jurisdiction to adjudicate upon measures taken by the States.

Chapter 3 of the Panel’s report makes it clear that the margin of appreciation is an inherent feature of subsidiarity.

The chapter contains a clear and useful discussion of the Margin of Appreciation and emphasizes that how any margin is applied is not simply a matter for Parliament alone or the courts alone.

An important question is what, if anything, is the WIDTH of any margin of appreciation. In other words, how much leeway is given to signatory States? 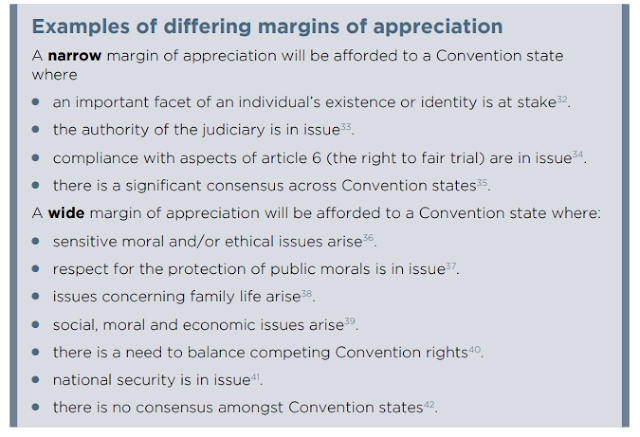 UK courts have generally been very careful regarding the margin of appreciation  and have, in some notable instances, held that a matter is more appropriate for consideration by Parliament.  In other words, the courts have a discretion (or, as the report says, margin of discretion). The report considers a number of cases that have come before the UK courts and notes the varying judicial views expressed in the Nicklinson case – R (Nicklinson and others) v Ministry of Justice [2014] UKSC 38.

Responses to the Panel’s Call for Evidence generally supported the current position adopted by the courts on margin of appreciation. Support came from Parliament’s Justice Committee and, notably,  from the Scottish Government, the Northern Ireland Human Rights Consortium, and the Queen’s University Belfast Human Rights Centre.

A number of options for change were put forward but either rejected or not recommended – (Chapter 3 paras 39, 42, 55, 61). The outcome of the Report was that there is no reasonable basis for departing from the current approach to margin of appreciation and no recommendation was made beyond that put forward for section 2 of the HRA (discussed above).

Judicial dialogue is said to be essential to the effective operation of the Convention.

Chapter 4 is (again) a detailed and informative analysis of this topic.

One benefit of enabling UK courts to engage in dialogue with the ECtHR was set out by Lord Bingham when the HRA was before Parliament. He noted that if UK judges were able to analyse ECtHR case law when considering the application of Convention rights domestically they would be able to explain to the ECtHR the UK national context effectively. UK judgments would therefore be able to explain relevant social, cultural and legal issues that the ECtHR may not otherwise have fully appreciated if the matter came before it. They could, consequently, put the ECtHR in a better position to assess UK compliance with Convention rights.

The UK senior courts frequently undertake careful examination of ECtHR case law. In some cases, formal dialogue has occurred when the UK court developed domestic law within the margin of appreciation. There are also cases where the UK court found that the ECtHR case law lacked clarity or consistency.

The report also discusses some high profile examples where dialogue has taken the form of the UK Supreme Court not following the ECtHR.  Examples include:

Dialogue is not solely a matter for the courts and the report looks at the role of Parliament.

The UK’s ban on prisoner voting is discussed at some length. In December 2017 the UK Government came up with proposals that the
Council of Europe said were sufficient to signify compliance with the
2005 ruling in Hirst. The Council finally closed the case in September 2018

There is also dialogue in that the ECtHR takes into account debates held in Parliament.

At Chapter 4 para 44 the report states – “The Government’s and Parliament’s role in strengthening the UK’s position in
formal dialogue with the ECtHR should not be overlooked. It is, in the
majority of the Panel’s view, complementary to the UK Courts’ formal
dialogue with the ECtHR. Having regard to the reality of the ECtHR’s current
practice, Parliament and Government play an important role in
demonstrating how the UK, as the primary forum for determining how to
give effect to Convention rights has done so and, particularly, how it has
done so consistently with the UK’s constitutional, legal and cultural traditions.”

A summary of the FORMAL dialogue processes is at para 46 – 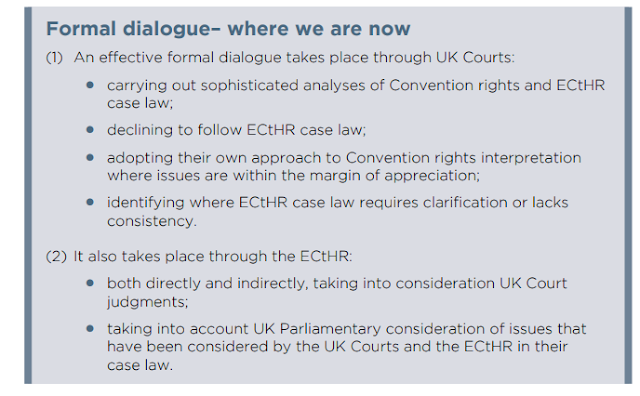 Areas where INFORMAL dialogue takes place are also discussed in the report. These are of interest and, regarding informal dialogue by the judiciary, are summarised at Chapter 4 para 53 –

Many responses to the Call for Evidence saw the dialogue as working well and the Joint Committee on Human Rights commented that – ‘It is clear that there is a very healthy state of judicial dialogue as between the
ECtHR and the UK judiciary.”

Responses also included some criticisms including the fact that the UK has not ratified Protocol 16 to the Convention which allows for Advisory Opinions.

One of the problems with Protocol 16 is that domestic courts may only request an Advisory Opinion “in the context of a case pending before it.” That could result in considerable delay. The Panel did not recommend the ratification of Protocol 16.

The Panel concluded that – “The overwhelming weight of the evidence presented to the Panel is strongly supportive of the view that formal and informal judicial dialogue have developed well. That is the view both domestically and of the ECtHR.”

Hence, the only recommendation is – “Continue to enable judicial dialogue to develop organically.”

Will working as a magistrate become the next CV must-have for wannabe lawyers?

36
Register as an Expert

No Result
View All Result

© 2021 Xperta Insights - Find your next expert witness with Xperta Pro.

Are you sure want to cancel subscription?